Boo! The Costs to Employers of a Haunting Trend in Hiring

How you can help keep ghosting from haunting your business

The unemployment rate continues to hold steady at historic lows. This might be great for workers, but it’s tough on employers. Companies are left with open positions for weeks, even months at a time, and this makes reaching growth and other goals difficult, if not impossible.

One troubling phenomenon arising from this new reality is “ghosting.” Ghosting refers to the action — by a job candidate who is in the interview process with a company — of cutting all communication and ties to the company suddenly, unexpectedly and without explanation. The term was coined in the mid-2000s, has gained prominence since, and is mostly used in the context of today’s online dating scene to describe someone who suddenly cuts all contact with a partner in a relationship. As unpleasant as it may be in the context of dating, in the context of the workplace, ghosting can be downright expensive for companies.

Across all industries, recruiting for positions takes, on average, 38 days. But in some industries – such as IT or other technical fields – it can take months. Across all industries recruiting costs companies roughly $3,000 to $5,000 per new hire and again, in some industries, the cost is much, much higher. Having candidates drop out of the process – especially unexpectedly and quietly – costs time and money, especially if it happens without explanation, as this can lead to additional time and effort wasted in follow up.

Once more common to the spectrum of lower-paid service and front-line jobs, in recent years ghosting has become more common in white-collar jobs, and it can cost employers serious time and money. According to a study by PRNewswire, over 40 percent of job seekers believe it is reasonable for a prospective hire to ghost a company. 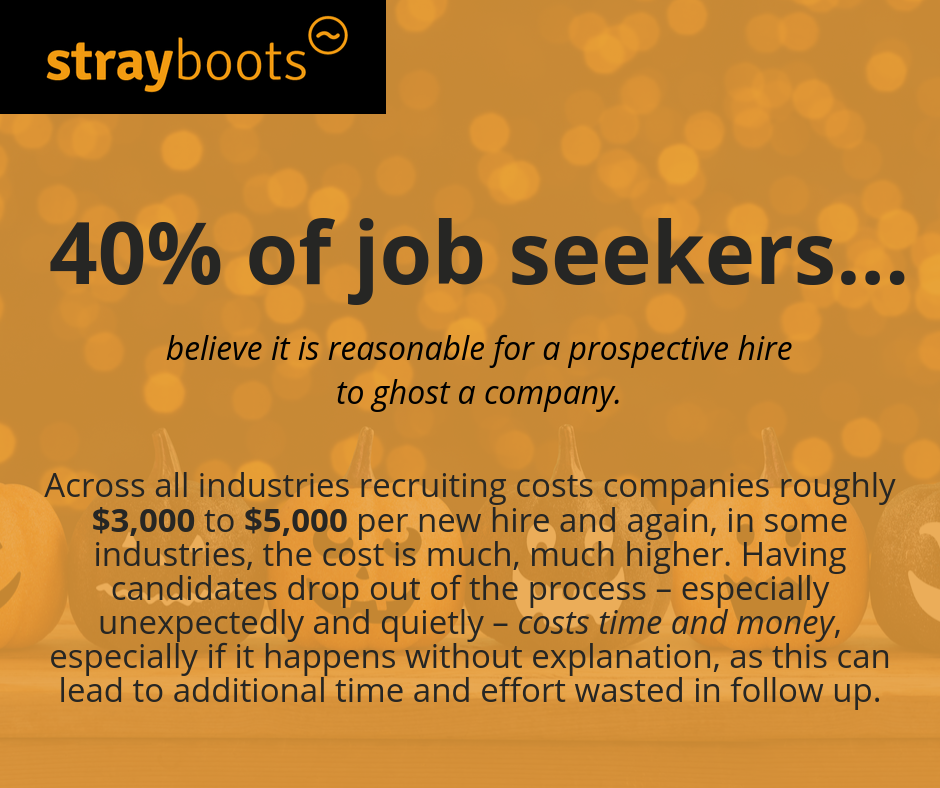 There are many theories as to why. According to some experts, it is merely an extension of what companies were already doing to candidates for years. And now the job market has become more competitive, job seekers are feeling newly emboldened. Other experts believe that layoffs across various industries over time coupled with a reduction in benefits such as pensions that tend to keep people around, and other corporate actions, have led to a more transactional market than ever before. Simply put, employees feel little to no loyalty to their employers anymore.

What can companies do to try to avoid ghosting? In short, there’s not much – at least while the market for employees remains so hot. But here are some thoughts that could help:

It’s hard to avoid being ghosted these days at least on some occasions, but being respectful and communicative during the hiring process can help reduce the number of candidates who ghost you. And working to build a culture of loyalty and happiness at your place of business, while not always an easy task, is one of the best and most important things a company can do today.