On the Importance of Walking

Sometimes it’s the simplest things that can help improve a team’s efficiency and creativity; like walking, as a study done at Stanford University seems to say.  We’ve long known about the positive effects of team building and exercise on mental well-being and creative ideation, at least anecdotally, but convincing your team to go on a run during the work day would be difficult at best.  As an author of a study on the creative benefits of walking said, “Asking someone to take a 30-minute run to improve creativity at work would be an unpopular prescription for many people.”

Walking has long been promoted as an activity to stimulate creativity and problem-solving.  According to his son, Charles Darwin took a walk each morning before breakfast, after which he usually did his best research.  Both Henry David Thoreau and Benjamin Franklin were proponents of taking walks, and Friedrich Nietzsche wrote, “All truly great thoughts are conceived while walking.”  Going on a walk can get your heart pumping and your thoughts flowing freely, and many people take a walk to collect their thoughts.

Studies have shown that there is a noticeable increase in creative thinking while walking and immediately following walking, lending some credence to Nietzsche’s aforementioned statement.  A study by Marily Oppezzo and Daniel L. Schwartz found that 80-100 percent of their participants had more creative responses when they were walking rather than sitting. They also noticed an increased trend in creativity whether the participants were walking indoors or out.  By having some of their participants take the test outdoors walking, in a wheelchair, and both walking and sitting indoors they were able to demonstrate an increase in creative responses happened whether the participant was indoors or out.  Beyond the benefits to creativity, there are also the obvious benefits to health, and a healthy team is always a welcome boon. 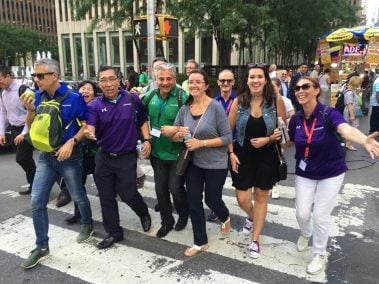 There are many simple ways to get employees up and walking on a fairly regular basis.  Walking to a nearby restaurant or cafe to hold a meeting will not only stimulate creativity, but help stimulate conversation amongst the team; always a useful tactic when trying to build a strong team.  Inviting a co-worker to walk with you while you have a short brainstorming session or asking them a question is another simple way to get people moving on a regular basis.  Taking a walk outdoors has the added benefit of exposing one to sunlight, which some say is as effective at waking someone up as a cup of coffee.  It’s easy to come up with a myriad of ways to add some more strolling to the day.

Mark Twain said, “The true charm of pedestrianism does not lie in the walking, or in the scenery, but in the talking.”  This statement shows how walking can help in the process of team building, and activities that foster positive communication are absolutely integral for any team.  Facilitating efficient communication within a team is a common difficulty and well designed systems can’t do it alone, so building genuine connections amongst a team is a necessity.

Walking usually forces people to turn their attention to their surroundings, which can stimulate more conversation between team members.  Team building activities that get the them talking freely amongst themselves are especially ideal, allowing team members to form natural bonds amongst themselves.  Setting up activities that have the team walking to the location of the activity and back to the workplace can lead to new ideas and creative solutions to current assignments as well as improving overall cohesion. 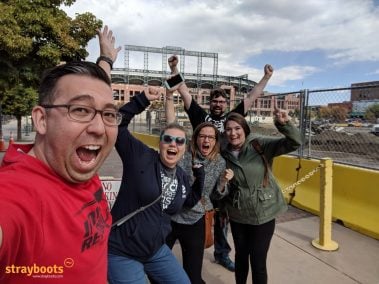 The results of the tests from Oppezzo and Schwartz’s study on the benefits of walking on creativity were highest when participants were walking compared to when participants sat down after walking.  This suggests that when trying to solve problems that require a bit of creativity, or situations demanding that spark of creativity that leads to innovation, teams should consider standing up and walking with fellow team members while discussing solutions to the current situation.  Practicing these skills in a non-work environment can also be highly beneficial to most teams, as well as holding the potential to be highly enjoyable to the team.

In the past creativity was considered to be the domain of poets, architects, musicians and artists, but in today’s constantly evolving business environment the need for creativity has come to the fore.  Finding new challenges or games for your team to engage in while walking can help improve both communication and creative problem solving.  Any activity that knocks out two of the proverbial birds with one stone is ideal.  It’s also good to keep things fresh and engaging for your team, so having them go to new locations for different team building events helps shake things up a bit.  If you’re looking for a new activity that gets your team walking and talking, consider trying a Strayboots scavenger hunt.