How AC may be impacting your team’s productivity

There is perhaps no greater battle in the office than the battle for the thermostat. It’s very often a battle of the sexes, with women preferring a warmer office and men preferring a colder environment. Yet, in these dog days of summer, it is worth discussing the fact that this battle may have deeper implications for business than just workplace disharmony – and may be directly linked to a company’s bottom line.

Office A/C wars are so culturally familiar they’ve been written about and spoofed extensively (take the College Humor video, “Why Summer is Women’s Winter,” for example).  However, the situation is not surprising considering many offices were originally designed with men, not women, in mind, and thermostats are set to temperatures based on the metabolic rates of men. 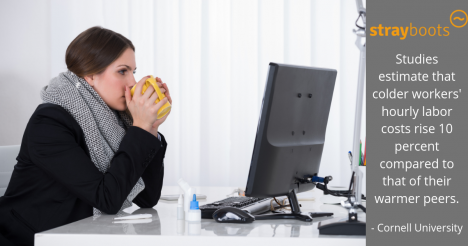 Most managers and operators of large buildings and offices have traditionally followed Ashrae 55: a building code created by the American Society of Heating, Refrigerating, and Air-Conditioning Engineers, to determine the ideal temperature for large buildings. Developed using a mathematical equation from the ’60s and ’70s, it sought to make one type of worker comfortable – a man in a full business suit. Add to this, fashion conventions that have women wearing lighter clothes and fewer layers in summer while men still wear long pants and closed-toe shoes, making it all the more difficult for employers to make both sexes temperature happy.

But what is the impact of this on the bottom line? A widely cited study by Cornell University in 2004, found warm workers work better. The study estimated colder workers’ hourly labor cost rose 10 percent compared to their warmer peers. Researchers found by increasing office temperature to 77 degrees from 68 degrees Fahrenheit, typing errors fell 44 percent and output increased by 150 percent.

Another interesting study by Tom Chang and Agne Kajackaite on the performance in math, verbal, and cognitive reflection tasks, found the impact of temperature varies significantly across genders. Women were found to perform significantly better as the temperature was raised while men showed decreases in performance. The question of course is, does raising the temperature correspondently negatively impact male workers as their female counterparts see major gains? The answer appears to be no. While men did see drops in productivity as the heat was turned up, it was minimal compared to the increase in productivity for women. Chang and Kajackaite suggested mixed-gender workplaces should increase the temperature above most offices’ current standards to increase productivity.

It’s not just productivity that is impacted by office temperatures; it turns out that temperature dramatically impacts moods as well as actions and even buying decisions.

The Campbell Soup Company has tapped into humanity’s relationship with temperature to, essentially, move more of its product. Campbell developed a “misery index” using an algorithm that determines how miserable the weather is. The colder, wetter the day, the more people desire soup as they seek comfort in the warmth it provides. If a city has a high score on the “misery index,” this triggers Campbell’s marketing team to buy more ads. Campbell understands human psychology in that we seem to hate being cold.

Research has found colder working temperatures corrode the quality of workplace relationships. Researchers found when people felt cold physically, they’re more likely to perceive others as being less generous or caring (i.e. socially cold). However, when people were warm, people let their guard down and viewed themselves as more similar to their peers. This could have a major impact on the success of team-building exercises or other employee engagement activities put on by HR. When planning team activities, HR managers should make sure to remember employee comfort in order to get the best results. By keeping the office at temperatures all employees find comfortable everyone’s mood and relationships improved.

The battle for the thermostat may turn out to be far more important than many managers realize. The significant benefits of warmer temperatures shown in relation to half the workforce may mean it is time to lay down our arms and declare warmer the winner of the thermostat wars. You may see a boost to your company’s bottom line as a result.