Harnessing the Thrill of the Game

Athletics, the NFL and Fantasy Football can be Good for Business

NFL Season is well underway; last night’s game is a favorite subject for water cooler talk, and employees are tabbing between work spreadsheets and the latest midweek predictions on ESPN. While, to some employers, this may seem like an unwanted annual distraction that keeps sports-loving employees from their work, companies may be able to learn a thing or two from the NFL, being one of the most successful business ventures in America. And there could be tangible benefits related to supporting the sport in the workplace.

Here are a few takeaways/food for thought for businesses:

Huddle and Hustle: How Teamwork Inspires an Entire Organization

The famed Vince Lombardi once said, “The achievements of an organization are the results of the combined efforts of each individual.” Teamwork is at the core of everything an NFL team does, both on the field and off. This focus has helped build an impressive empire, to say the least.

Today the average NFL team is worth an estimated $2.57 Billion with 32 teams in the league. It employs an impressive estimated 115,000 people and its reach is felt worldwide, with approximately 20 million fans watching during any given game.

Of course, teamwork is evident on the field between players, coaches, captains, and staff, and the work to foster team relationships continues, even in the off-season. In recent years, coaches have been spending valuable offseason practice time going on team-building outings ranging anywhere from Dave & Buster’s to team vacations in Hawaii and doing team-building activities like playing kickball and dodgeball. The learning and bonding that occurs during these events translate to benefits on the field. Players also point out that the events help rookies connect and feel like a part of the team, especially when they join championship-winning programs with highly established veterans.

Of course, the positive impacts of team-building activities aren’t just applicable to the NFL; the lesson is true for all teams, especially in business, where the benefits can be tangible. The Houston Chronicle reports that team-building exercises improve productivity, motivation, and creativity. Helping your team members connect on more personal level benefits each of your employees as well as your company as a whole.

The NFL’s approach to negative behavior has been to hand out monetary punishment for on-field antics that dishonor the game. The league gives out these fines as a last resort and as a way to encourage good behavior on the field. Fines on teams with players who get arrested or otherwise tarnish the NFL brand have also been proposed (although critics say that more could and should be done in this area). Overall the NFL recognizes negative behavior as a significant strain on the entire organization – and indeed the game as a whole – and works to address many issues quickly.

There are parallels to the business world that are worth noting. Research indicates that one bad apple can, indeed, have a significant, negative impact on an organization. Brian Hamilton of Sageworks argues that it is never worth keeping an employee who is disrupting business, even if that person has impressive skills, brings in significant revenue, or is a leader in the organization. A bad attitude can infect an entire organization. “Be slow to hire and quick to fire,” it seems, is a truism for sure.

Harnessing the Thrill of the Game

Overall, watching and supporting athletics can be incredibly gratifying. Since the dawn of human history, athletic competition has rallied and inspired people, and science shows us why; just thinking about your sports team releases dopamine in your brain. Some researchers suggest that watching your favorite team play releases lights up reward centers of the brain similar to those that are affected when you take drugs (In fact, there is a growing body of research on the relationship between athletics and addiction).

A parallel in the business world is the growing use of gamification tools to motivate employees, a topic we have written about before in Winning Over the Esports Generation of Workers. Gamification can increase productivity, enhance communication, create a more effective learning environment and more. And when it comes to football season, Fantasy Football offers ready-made gamification opportunities that companies can harness for benefits.

It’s not hard to see why many companies actively encourage Fantasy Football. An estimated 15.6M people in the United States alone participated in a fantasy league in 2017, with that number continuing to grow every year. While some may claim creating a Fantasy Football league in the workplace could lower productivity, research shows otherwise. The Society of Human Resources conducted a survey and concluded that fantasy leagues in the office helped to improve relationship building, team-building, and employee engagement. Fantasy football not only helps solidify intra-office relationships, but it can also help build relationships with those outside your organization – vendors, clients, and customers 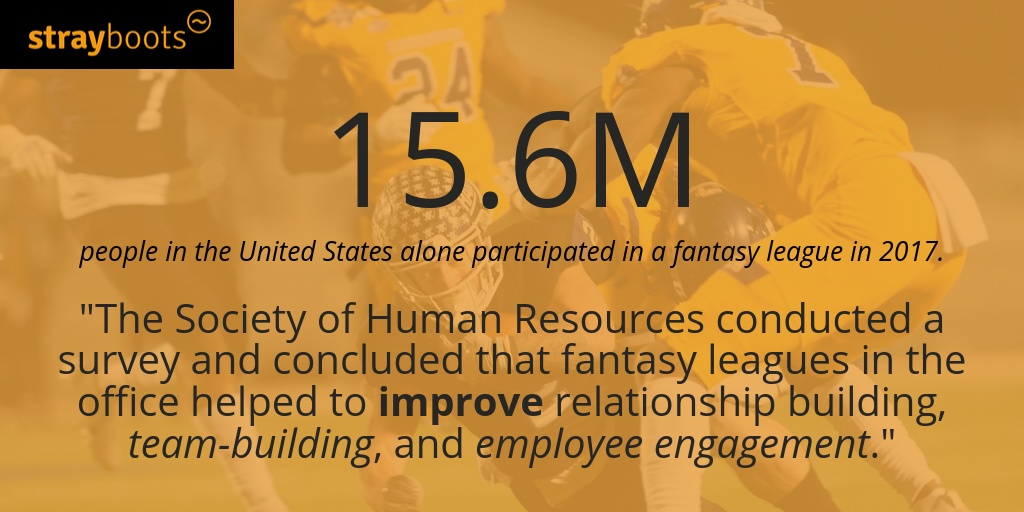 If you haven’t already done so, consider sanctioning an official office league for all the employees who are interested in joining. While it may seem counter-intuitive, Fantasy Football can be a great way to leverage the water cooler talk already happening in the office and turn it into a productive team-building tool. Perks such as access to a “victory” parking space for a day or two can up the ante and make the stakes all that more enjoyable.