Fostering a competitive spirit is a desirable outcome of most team building events, but with improper planning or implementation, it can also go horribly awry.  A Californian home security company allowed a team building exercise to go terribly wrong, resulting in a woman suing her former employer 1.5 million dollars for harassment.  Although most people are aware that activities involving spanking (albeit to both men and women in this case) are probably not a good idea in most workplaces, team leaders can sometimes lose sight of ensuring a safe environment while pursuing that competitive spirit that can so effectively motivate a team.

The woman’s lawsuit was eventually thrown out, but no company wants to deal with a situation like that one.  In this case, the company had been paddling their employees with competing company’s yard signs as part of an activity pitting sales teams against each other.  They also had them eat baby food, wear diapers, and pushed others to make fun of the losers.  Some people may be motivated by activities like these (whether through fun or fear of punishment is debatable), but many people do not perform well when they are shamed or made to feel uncomfortable.  Fortunately, most companies are aware that activities like these are not likely to be successful in many workplaces.

We’re all familiar with most of the risks that creating competition within the workplace might entail: hurt feelings, negative atmosphere, and stress to just name a few.  Some studies have shown that forty percent of workers feel overworked and pressured, to the point of depression, anxiety and illness. Despite these concerns, if it’s necessary to your organization (and it is to most) you’ll want to include team building activities that will light that competitive spark, and probably the easiest and most effective way to do this is to focus on competition between teams, not team members.

There’s a fairly well-known story from Charles M. Schwab, the steel magnate, and how he increased productivity at his mills by writing down each shift’s production for that day.  Sadly we don’t all work in industries where simple things like the aforementioned anecdote can be used to inspire a competitive spirit between teams, and team building activities that reward or punish teams within the workplace can easily generate resentment.  Not only are employees competing for higher pay or promotion, but they are also now feeling even more pressure to perform well.  This might be a big part of why team building is sometimes looked upon so cynically by some.  Luckily it is fairly easy to find or create events outside of work, and these can still foster competition without generating a negative workplace atmosphere. 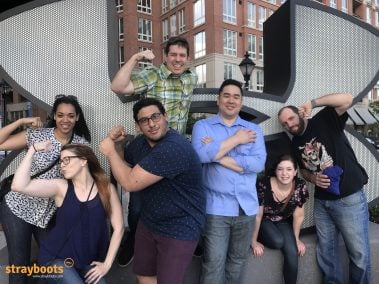 A very important thing to consider when planning a team building event is what can help facilitate the fun.  Beyond just the competition within the activity itself, it is good to look for ways of helping all of your team have fun even if competition isn’t usually their thing.  I discussed walking in a previous post, which is a simple thing that can be easily included in a competitive team building activity that helps improve mood without being too intrusive.  Including a group meal before, during or after the activity is another easy way to bolster the team’s spirits.  Facilitating a correlation between shared fun with their team and a competitive atmosphere can greatly improve team cohesion.

The well-documented benefits of just simply going outside are another key thing to keep in mind when searching for a team building event that can inspire a little competition.  This can also enable you to separate the competing teams.  Competing face to face and trash-talking can be fun, but at times this can cause some employees to become uncomfortable.  Team leaders should look for events that can have different groups completing objectives together, comparing results infrequently.  Most people become inclined to stop trying if they know they’re losing, especially if there are little or no consequences for a loss.  If a team doesn’t know how well others are scoring, or how fast their times are, they’ll keep their intensity up until they get the results.

People are comfortable with different things, and team leaders need to keep this in mind if they want their team building events to get real benefits.  When trying to find events to help generate a more competitive atmosphere within your workplace, make sure that there is something for everybody and that the overall atmosphere helps facilitate a positive environment for everyone.  Finding an activity that has competitive elements, and keeps a team focused on positive interactions with their teammates, can help keep everyone engaged with the activity.  For team building to work everyone needs to be positively engaged.