Should Columbus Day Be Celebrated in the Modern Workplace?

“In 1492, Columbus sailed the ocean blue…” a familiar rhyme taught to Americans in grade school, celebrates Columbus’ ‘discovery’ of America (and the opening up of the New World for European exploration and colonization). But in recent years, many have pointed out that this truth is anything but clear-cut. This has led to several changes in our society, from edits to history books and discussions in the classroom to the fact that fewer and fewer businesses are celebrating Columbus Day as a national holiday.

Of course, we know today that the Vikings discovered North America nearly 500 years before Columbus. But in the eighteenth and nineteenth centuries, this information was not known, and some historians believe the story of Columbus may have catalyzed pride for certain groups who were, at the time, subject to discrimination as recent immigrants.

As Italian-Americans began to settle in American cities in large numbers in the 19th century, they faced widespread religious and ethnic discrimination. In fact, the largest lynching in American history occurred in New Orleans when 11 Sicilian immigrants were killed after being suspected of murdering the city’s police commissioner. Struggling with the ethnic and religious persecution, these immigrants may have seen celebrating the accomplishments of Columbus as a way for Italian Americans to become more widely accepted in American culture.

Celebrations relating to Columbus continued and expanded in the United States in 1937, President Franklin Delano Roosevelt declared Columbus Day a federal holiday (by some reports in response to lobbying by the influential Catholic fraternal organization the Knights of Columbus). From there, businesses began to adopt the holiday as well.

Modern controversies surrounding Columbus Day began around 1977 as a result of the United Nation’s International Conference on Discrimination Against Indigenous Populations in the Americas. It wasn’t until 1991, when Berkeley, California voted to formally replace Columbus Day with Indigenous Peoples’ Day, that a U.S. territory took steps toward dismantling formal/government-sponsored celebrations of the Italian explorer. Since Berkeley’s decision, many states have also voted to formally stop celebrating Columbus Day, and instead, celebrate Indigenous Peoples’ Day including Maine, Alaska, New Mexico, Minnesota, Vermont, and South Dakota. 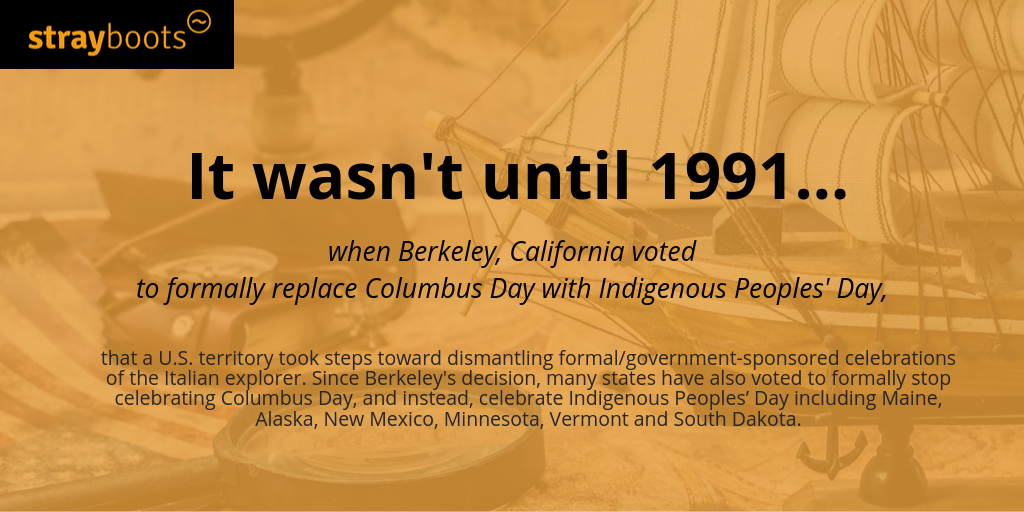 So where does this leave us today? According to the Society for Human Resource Management (SHRM), six days are almost universally embraced in the U.S. as paid holidays. They are New Year’s Day, Memorial Day, Independence Day, Labor Day, Thanksgiving, and Christmas. Columbus Day is not included in that list.

This, however, may not be entirely due to activism against the holiday. During the Great Recession, many companies tried to find cost-saving options. One option was to cut paid days off and Columbus Day was a particularly attractive option given its controversial past; many companies stopped giving the day as a holiday. Today, even the Stock Market (which closes for most other Federal holidays) remains open.

Today only about 16 percent of businesses close on Columbus Day according to SHRM’s data (however, with many school districts around the country closing on the day, working parents are often left to arrange childcare). Interestingly some reports suggest that companies are considering bringing back certain holidays sidelined during the Recession. Whether Columbus Day will make a comeback remains to be seen, but it appears that businesses are, instead, opting for alternatives such as making Black Friday a holiday for workers (thereby granting a four-day holiday weekend).

Diversity in the Workplace

The benefits of diversity, in a business context, have been widely studied and documented. The Boston Consulting Group, for example, found that even slightly more diverse leadership teams lead to more and better innovation and improved financial performance. Tufts University found diverse groups perform better than their homogenous peers when making decisions.

Thus, conversations about how to make workplaces more diverse can carry tangible and significant benefits to a business. And although the number of businesses celebrating Columbus Day as a holiday has been tapering over the years, Columbus Day may represent an opportunity for dialogue about diversity in the workplace.

As our society becomes increasingly polarized and tensions between ethnic and socioeconomic groups continue to rise, it is becoming increasingly important for employers to play a role in helping to diffuse these tensions. It is by no means an easy job. But the benefits of having conversations are significant. Columbus Day can be an opportunity to do so. Celebrating your teams’ diversity, the heritage of those from historically disadvantaged backgrounds, and encouraging different points of view not only fosters an atmosphere of tolerance and benefits workers, but it is also very good for business.